The bandwidth of the PTN network used for access and aggregation multiplied, making the transmission conditions of the C-RAN mature.

China Mobile has proposed the development direction of C-RAN as early as three or four years ago. At that time, it was mainly hoped to realize the flexible call of a large number of base station resources and radio frequency resources of China Mobile. However, at that time, due to the insufficient resources of China Mobile's optical network, it could not support the large-bandwidth transmission requirements of C-RAN in realizing the concentration of baseband resources. Therefore, C-RAN has been in the state of pilot and demonstration applications.

However, the current C-RAN application environment has gradually become available.

Speaking of the benefits of doing so, Li Chunting said: "When we virtualize the software in the BBU and the software in the baseband controller to a general-purpose server, the server can be placed in the same room as the content provider's server. It can even be placed directly on the same server platform, allowing applications provided by these content providers, such as video, to interact directly with the underlying wireless communication software, so that the entire mobile Internet can be clouded and better integrated with the Internet. ""

C-RAN is conducive to the construction of heterogeneous networks

"In the past, there were only macro base stations in the mobile network, and 2G and 3G were such network construction methods." Li Chunting said, "This method cannot meet the requirements of 4G low latency, big data, and high speed." 4G requires more network. Flexible, small base stations come into being. These small base stations can be hung on poles, hung on trees, and installed on walls. Because the antennas are integrated in the base station, there is no need to build an antenna for the tower, and the site selection is flexible. Moreover, the small base station has flexible networking support, and also includes WIFI function. With small base stations, the network can be structured and layered to solve the demand for hot-spot and large-capacity Internet access, and at the same time, it can better solve the coverage problem in downtown areas. â€œIn the case of large buildings in large and medium-sized cities in China, coverage is a big problem. Sometimes, at the corner of a tall building, the signal is gone. Small base stations are easy to solve these problems,â€ Li Chunting said.

After the implementation of C-RAN, there will be significant savings in the operator's operating costs. "After the cloudization, the small base station solution based on the layered network and the heterogeneous network can bring great savings to the operators, and the management is very convenient. In the past, there were thousands of computer rooms, after virtualization, these All the software in the computer room runs on one server or several servers, and it can be placed in one room.â€ Li Chunting said, â€œafter cloudization, operators can directly get involved in the services of content providers, and will be virtualized. The pipeline is better connected to the application, and the network utilization efficiency is higher. Because the services of other content providers can only be implemented at the server level, and the mobile operators can directly implement the application on the wireless layer, the terminal customer The experience is different, and it also has potential help for the expansion of the business field, so virtualization is an inevitable trend."

The scale of smart terminals and the formation of 3G user behaviors such as Weibo and mobile video have accelerated the arrival of the mobile Internet era, and mobile operators are facing an unprecedented fierce competition environment. The user's ARPU value grows slowly, even slowly. At the same time, the traffic of mobile Internet services has risen rapidly, and the costs for building, operating, and upgrading wireless access networks have increased, while revenues have increased slowly. The reason is that the current development of mobile Internet is subject to the concept and method of traditional mobile network construction, and cannot meet the huge mobile data growth demand.

The traditional network construction method has high cost and large network energy consumption. However, the ARPU value of users is growing slowly. Therefore, in the era of mobile Internet, operators may face the embarrassment of being unable to make ends meet. In addition, traditional site selection requirements are high, property coordination is difficult, and mobile network construction is also restricted.

In the traditional construction scheme, the mutually separated cell signals are processed independently, and there is a large interference between them, and the base stations cannot be co-processed, and the capability of supporting high bandwidth is limited.

The characteristics of the mobile network determine that the network capacity varies greatly at different times and in different regions, and there is a â€œtidal effectâ€. Traditional construction mode Each cell can only be designed according to the maximum capacity. When the capacity is spare, resources cannot be shared within the entire network, and the efficiency is low. In the era of mobile Internet, users have a higher throughput rate, and the tidal effect is more obvious, requiring resources to be shared within the network.

It is difficult to integrate multiple standards

The era of mobile Internet is an era of coexistence of wireless multi-standard networks. Many operators have networks of two or more types at the same time. It is difficult to implement multi-standard integration networking in the traditional way.

In response to the above problems, the industry is also constantly researching and exploring. For example, C-RAN, a green access network architecture proposed by China Mobile, is a very representative concept innovation of network construction and application mode. The general concern of operators.

C-RAN is a collaborative wireless network consisting of a centralized baseband processing pool, a remote radio unit and an antenna. It is a real-time cloud infrastructure based on an open platform, as shown in Figure 1. 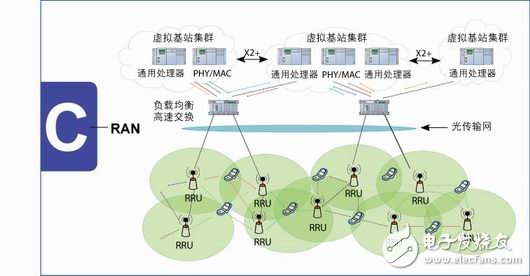 The core concept of China Mobile C-RAN is â€œgreen, collaborative, shared, cloud computing based on the same platformâ€. At present, the industry has carried out a comprehensive study on C-RAN. ZTE, which first proposed the "super baseband pool" solution, has completed the "1000 carrier frequency baseband pool" technical solution demonstration and the general processor prototype based on China Mobile. Verification, and future-oriented C-RAN technology solutions such as active antennas and LTE-A prototypes.

The total cost of ownership (TCO) of the network consists of network construction expenditure (CAPEX) and network operation expenditure (OPEX). Under the traditional mobile network construction, CAPEX has more than 60% of equipment room, transmission and air-conditioning, and runs for 7 years according to the network. Calculated, OPEX accounts for more than 60% of the total TCO, and mainly comes from air-conditioning electricity costs, computer room rental and other supporting consumption.

With the construction of C-RAN, the supporting investment will be greatly reduced, and the investment will be concentrated on the strategic resources of operators such as main equipment, optical fiber, pipeline and sky. We use the new six sites in rural areas as an example to analyze the cost comparison between C-RAN and traditional construction methods. It can be concluded that the C-RAN mode realizes baseband resource sharing and flexible scheduling, effectively improves resource utilization and saves 9% of equipment costs; C-RAN construction mode, revolutionizes the construction room, transmission, and sky surface construction costs, saving 30 %; accordingly, the cost of electricity, maintenance, etc. is greatly reduced, saving 76%.

China Mobile's GSM network is the world's largest GSM network. With the rapid growth of data services, the existing network is overwhelmed: the utilization of wireless resources is more than 75%, and the urban stations are above 8 carrier frequencies, and the frequency reuse factor is less than 10, the frequency resources are tight; the station with a station distance less than 350m is gradually increasing, the network planning is extremely complicated, and the traditional cell splitting, loading frequency and other expansion methods encounter bottlenecks.

The GSM C-RAN solution makes full use of the idea of â€‹â€‹sharing and collaboration: the tidal effect will reduce the utilization of wireless resources. One of the goals of C-RAN technology is to automatically adjust network resources with the migration of traffic resources, such as the concentration adopted by ZTE. The baseband resource pool and multi-RRU cell merging technology can not only solve the traffic migration caused by the tidal effect, but also utilize multiple RRU cooperative coverage to increase the diversity gain.

The formal introduction of the C-RAN solution has only been one year since then. ZTE has introduced relevant concepts in wireless solutions and achieved its goal in product solutions through technological innovation.

The baseband of 3G and LTE base stations in the industry are concentrated on the BBU. Some of the GSM equipment basebands are placed on the RRU. The baseband of all wireless standards of ZTE is concentrated on the BBU. Currently, the GSM BBU can realize the baseband dynamic sharing of 108 carrier frequencies. The communication will be launched at the end of 2011 to share the baseband resources above 1000 carrier frequencies, laying the foundation for large-scale base station coordination and sharing.

ZTE's RRU equipment is the only 2T4R equipment based on multi-carrier power amplifier. It has a single RRU12 carrier frequency and supports single-module cross-cell configuration (single module can support S66 station type). No need for supporting, easy installation and flexible networking. Supports ring and chain networking of RRU. And the device itself has a peak power consumption of only 460W.

All of ZTE's wireless standards use the SDR platform. Based on the open MicroTCA standard architecture, the smooth evolution of BBU and RRU is realized. The GSM/TD/LTE baseband processing unit can use the same platform architecture, sharing the chassis, backplane, power supply, and main Control, clock and transmission. In the future, a common BBU for GSM, TD-SCDMA, and LTE networks will be implemented. Multiple RRUs will be pooled together to simplify the network and reduce the inter-base station interaction delay. This provides an infrastructure for multi-cell cooperative radio resource management and wireless signal management.

At present, China Mobile's GSM bearer network adopts SDH, and usually 6-8 stations form a ring, occupying a pair of optical fibers. In GSM C-RAN, ZTE adopts innovative technologies such as fast phase-locked and high-quality clocks to support 18-level cascading, and 6G optical ports are used between BBUs and RRUs, and traditional SDH bearers consume the same amount of fiber resources. Supports a variety of carrier modes, such as fiber direct drive and color direct drive, for various application scenarios. In addition, ZTE uses the idle field of the CPRI interface protocol between the BBU and the RRU to develop a series of functions to meet the centralized maintenance and management of the network according to the transmission and network management requirements, so that the network is more controllable.

Practice has proved that the wireless network architecture based on the C-RAN idea can achieve "large capacity, less bureaucracy", and bring a great amount of throttling to the operator network construction. In the global GSM network new equipment procurement and replacement of old equipment, the procurement of GSM equipment with C-RAN characteristics, using C-RAN concept to create a new generation of GSM network, will be the choice of more and more mobile operators.

Looking into the future, C-RAN research needs more industry resources to join, and through the joint promotion of mobile operators, telecom equipment manufacturers and traditional IT system vendors, continuously enrich the content of C-RAN solutions and accelerate the next-generation wireless access network. The introduction of the architecture will create a new architecture era of high-performance, low-cost green wireless access networks.