In recent years, gallium nitride (GaN) series compound semiconductor materials have been proven to have great potential for use in liquid crystal display (LCD) backlight modules, optical storage systems, high frequency and high power microwave electronic components and other commercial uses. However, currently commercialized gallium nitride based semiconductor optoelectronic components are dominated by sapphire and SiC substrates, and major fundamental patents are in the hands of Japanese, American and German manufacturers. In view of the problems of patents and materials, the development of GaN-on-Si epitaxial technology can get rid of key raw materials and technology is subject to the predicament of the United States and Japan.

The growth of gallium nitride epitaxial films with germanium semiconductors not only has the advantages of low cost, large area and high conductivity (thermal) substrate, but also can be further combined with the highly mature germanium semiconductor industry into an optoelectronic integrated circuit (IC). The grain processing technology includes etching, yellow light, metal electrode coating, grinding and cutting. It is developed in different component fields by different strategies of horizontal division and vertical integration to strengthen the domestic independent research and development, production and sales of key photoelectric components.

Taking GaN-on-Si as an example, since the lattice constant between the gallium nitride material and the germanium substrate is not matched, and the difference in thermal expansion coefficient is added, if the gallium nitride thin film material is directly grown on the germanium substrate, the film may be caused by The difference in lattice constant between the substrate and the substrate is too large, resulting in a very high defect density in the film, which in turn reduces the efficiency of the device. Therefore, a buffer layer material is usually required between the two. The aluminum nitride thin film material is very suitable as a buffer layer material of GaN-on-Si because of its wide energy gap, high thermal stability and high heat dissipation, and the lattice complementary of the GaN thin film.

In the development of GaN-on-Si epitaxial technology, key development projects include high-quality aluminum nitride buffer film materials and aluminum nitride (AlGaN)/GaN superlattice (SuperlatTIce) low defect density buffer layer technology. At the same time, we will develop various key technologies to improve the efficiency of light-emitting diodes (LEDs) to complement each other and catch up with the technological standards of advanced countries.

In addition to buffering the stress between the gallium nitride material and the germanium substrate, the buffer layer also provides an interface environment for nucleation and growth of the gallium nitride thin film material, so the quality of the buffer layer directly affects the device efficiency. There are many methods for growing GaN-on-Si, including Molecular Beam Epitaxy (MBE) and Metal-organic Chemical Vapor DeposiTIon (MOCVD). However, the most mature technologies currently have the following Several methods--AlN Seed Layer, Low-temperature AlN Interlayer, Substrate Containing Amorphous Layer, and patterned ruthenium substrate Patterned Si Substrate), aluminum gallium nitride buffer layer and AlGaN Buffer Layer and AlGaN/GaN SuperlatTIce Structure.

The yield of large-size gallium nitride epitaxial wafers is not high, and the component cost cannot be greatly reduced. The factor affecting the yield is the difference in the expansion coefficient between the gallium nitride epitaxial film and the germanium substrate, resulting in difficulty in stress release, resulting in Lei. The rupture of the crystal layer (Fig. 1), and the technology for achieving substrate separation using the wafer bonding (Wafer Bonding) technology and the Laser Lift Off system is expensive and the yield is not high, so the development of high quality GaN The key to the -on-Si growth technology is to effectively control the adverse effects of the interface stress, and to avoid the cumbersome processes such as wafer bonding and laser lift-off, to produce high-quality large-size and surface-free GaN-on-Si Wafer. 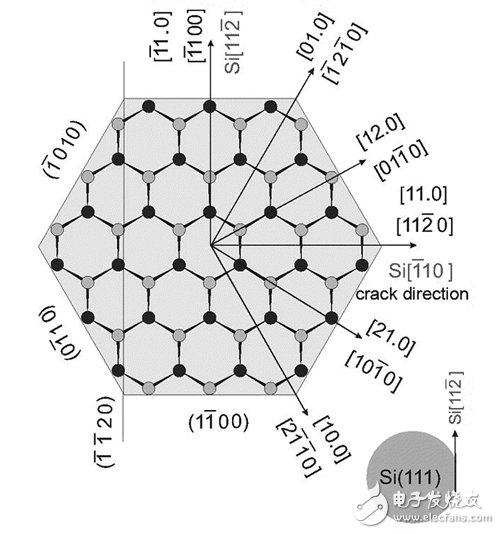 Figure: The relationship between the epitaxial lattice of gallium nitride and germanium