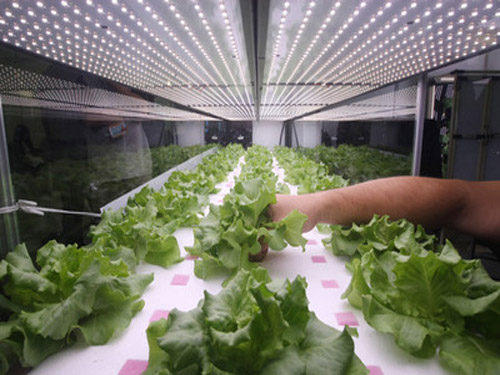 In recent years, the global sunshine time has continuously decreased, which is very unfavorable for agricultural development. With the continuous development of production technology and the growing demand for improved plant yields and shortened planting cycles, artificial light sources have begun to be used in plant cultivation.

"Artificial Sunshine" Creates Miracles In the plant plant built by Shanghai Semiconductor Lighting Engineering Technology Research Center and Shanghai Sunqiao Agricultural Technology Co., Ltd., the growth of ginseng, lettuce, chicken feathers, and tomatoes does not depend on sunlight, but depends on LED lighting. .

Studies have found that many plants need only red and blue light during their growth. LEDs can emit light of various wavelengths. Compared with the full spectrum of sunlight, researchers can use "light distribution" to allow them to accept only "man-made sunlight" in certain wavelength ranges. Therefore, in this 200 square meter "plant factory", researchers only exposed plants to blue and red light. LED 24 hours a day, even in the night, plants continue to photosynthesis.

In this environment, the growth rate of plants is greatly increased. It takes 52 days to 60 days to grow vegetables. After using the LED plant grower, it matures in 20 days.

Replacing the sun with LED lights increases the cost of plant production, but it does not mean that farmers benefit less. Since there is no need to rely on the weather to eat, in the laboratory, the plants are vertically distributed into 2 to 5 layers. Each layer has an LED light source. This design model has greatly increased the unit yield of crops. Researcher Li Yuzhi stated that the increase in output value could offset the increase in costs and ultimately benefit farmers.

The Japanese central government and local governments have been coaching local agricultural practitioners since 2011 to develop plant factories and make up for the lack of sunlight through LED lighting. Japan also researched the use of LED lighting in poultry facilities. Research has found that using yellow LED lighting can save costs and reduce the aggressiveness of poultry.