Many friends are always tangled up in decorating their new home. When setting up a living room, do they buy a large-size TV or purchase a laser television? From the perspective of home design, TV may be an essential standard for the living room, or else the sofa The opposite side of a wall is always left wondering where things are weird. From the viewing experience, some movie enthusiasts are biased towards larger-sized laser television products. As a hot television product in recent years, how effective is the laser television? What is the significance of consumers buying it?

As the audio-visual center for entertainment in the living room of a home, TVs from the initial black and white, to the CRT, went through a rear projection, plasma flashes, and then LCD dominated the market. Quantum dots, OLEDs, and laser televisions are now appearing. People are pursuing bigger and clearer images. The desire for television products is endless. When large-size TV products are too expensive, and traditional projectors have lethal display problems such as lamp life, projection brightness, and the like, laser projection TVs are taken as a novel solution by the manufacturers to the table.

In fact, laser television has already had a technical prototype as early as the 1990s. In 2006, Mitsubishi launched a 40-inch laser TV prototype. In 2007, Sony again launched a high-profile launch of a 60-inch laser TV prototype. At the 2007 International Consumer Electronics Show, Sony and Mitsubishi respectively showed A 55-inch, 40-inch laser TV prototype was produced. However, due to poor sales, technical bottlenecks and other reasons, several international electronics giants have withdrawn from the laser TV market. However, on the other hand, domestic manufacturers have suddenly made headway in the laser television market. They have all laid out R&D. From this year's IFA Electronics Show in Germany, it can be seen that several domestic large companies like TCL, Changhong, and Hisense have demonstrated The latest laser television products. 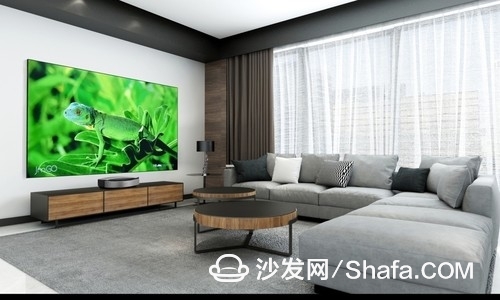 Can you really capture the hearts and minds of consumers? It is understood that laser televisions use lasers as light sources and use reflective ultra-short-focus projection technology to project light onto special metal screens. Can achieve 100-inch large screen, enhance the presence of sense; gamut coverage theoretically up to 90% of the human gamut, the screen is more real, more layered and more transparent. But is this really the case?

Laser TV is a projector?

The reason why I dare to call TV is mainly because of its ultra-short-focus projection characteristics. Laser TVs have a small footprint and are projected almost vertically, so the projection ratio is very small, and the host can project almost 100 inches or more under the screen. Big picture. Laser TVs will be equipped with special screens, stereos, and some supporting facilities, with their own system UI, content with audio and video program sources, these features can also be called TV products.

At present, the laser TV products on the market are actually the same as the projectors in terms of structure, but the advantage of laser TVs is still obvious compared to the traditional projection products. After a certain period of time, the traditional projection equipment will appear dark and yellow. The brightness, color saturation, and contrast are significantly reduced. The laser television product uses the laser as the light source, which greatly improves the brightness and the life. And the biggest drawback of traditional projection products is that they have a single function, while laser televisions have a wealth of content resources to meet the daily visual and audio requirements of users.

The display effect is not as good as the LCD?

The vast majority of laser TV products currently on the market use single-chip DLP projection technology, which means that the image signal is digitally processed first, and then the light is projected. Light sources play a decisive role in the imaging of DLP technology. Theoretically, the laser light source can achieve a very high level of performance in the color gamut, but it refers to an RGB laser light source. However, it is limited by the cost and technology. Currently, most laser television products use monochromatic lasers as the light source. The color separation with phosphor color wheel is not ideal for the breadth of the color gamut. The actual color has its own backlight capability. Compared with LCD TVs, there are still gaps.

Laser television products are currently affected by the influence of ambient light. Although compared with the traditional projection equipment, the advantages of resisting ambient light are more obvious. In fact, the problem of dimming the brightness of the laser TV is still obvious. After all, it is not self-luminous. The greater the size, the greater the loss of light. Backlit LCD TVs still have a certain disadvantage. In addition, due to the special reflective principle of the panel, the viewing angle of the laser television cannot achieve a wide-angle viewing angle like a liquid crystal television. After a certain angle, the effect on brightness and visibility is significantly reduced.

Many consumers purchase laser televisions to a large extent that they have a size of one hundred inches or more. Traditional LCD TVs have relatively small screen sizes. Seventy to eighty inches are already the limiting size of mainstream large screen products. Seven or eight million, more than one million, the price of laser television does have a great advantage, but not the bigger the size, the better, for example, watching the distance too close, easily lead to the user's visual fatigue, and the screen will produce a slight Grainy, it becomes less real. So consumers should also consider the size of their own living room space when they buy.

Written in the final: The giant screen, immersive, and cost-effectiveness of laser television are all advantages. However, at this stage, the technology is still not perfect. The selling price in the market is still high for ordinary families. Both the body position and the screen cannot be freely moved, otherwise a screen trapezoidal distortion may occur, and these factors restrict the development of the laser television. Whether it is traditional LCD TVs or laser TVs, consumers should consider their own needs when shopping, and they are the right choice for themselves.