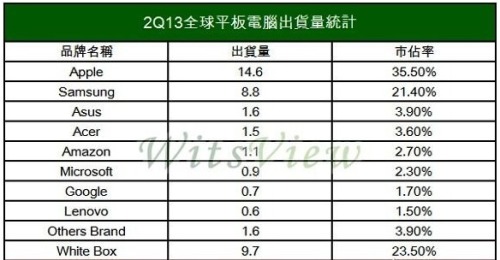 According to WitsView, an optoelectronics business unit of TrendForce, the global market research organization, the worldâ€™s second-quarter shipment of WSVGA and above tablet PCs was 41.1 million units, which was a 12.4% decline from the previous quarter, with the exception of seasonal factors. In addition, some of the main products have entered the generations alternately, and the inventory adjustments made in response to sluggish sales are the key factors leading to the decline in shipments.

WitsView Research Associate Qiu Yubin said that as the largest single brand tablet PC shipments, Apple's second quarter due to the end of the 9.7-inch iPad into the end of the life cycle, coupled with the high price of the iPad mini led to a slowdown in the sales force caused by the impact of inventory adjustment In the next quarter, shipments declined from 19.5 million units in the first quarter to 14.6 million units in the second quarter. Excluding the quarterly recession rate of 25%, its market share slipped to a record low of 35.5%.

Samsungâ€™s aggressive attempts to expand shipments of tablets this year are also reflected in shipments in the second quarter. Although shipments of 8.8 million units declined slightly from the previous quarter, the market share climbed from 20.2% to 21.5% under the new 8K model. In the two major PC brands of Asustek and Acer, in the first half of the year, they all focused on products with a price of less than $130, and the low-cost strategy also made the two brands become one of the few counter-trend growth brands. The rates were 60% and 36%, respectively, and bright transcripts were paid out.

Qiu Yubin pointed out that the two major manufacturers, Amazon and Google, which have always been in the low-cost flat-panel market, have not achieved satisfactory results in the second quarter, with only 1.1 million units and 0.9 million units respectively. The Amazon 2013 new machine is almost concentrated on shipments after September. At this stage, it is still in the empty window period. As for Google's main product, the Nexus 7, the first generation of products entered the end of the second quarter, resulting in a sharp decline in shipments. In the third quarter, it is estimated that the shipment of single-quarter products will return to the scale of more than 2 million units due to the smooth volume of the second-generation products.

The second quarter of the Whiteboard is also unlikely to escape the fate of the recession. The price increase and the shortage of key component memory have caused many smaller Whiteboards to face the double blows of rising costs and insufficient supply. In addition, the brands have forced their low-cost flat panels to squeeze into their living space. Under the impact of external hardships, the shipment volume of Baipai Tablets in the second quarter was only 9.7 million units, and the quarterly decline was 7%.

According to WitsView's analysis, besides the above-mentioned Amazon 7-year new model and the second-generation Nexus 7, there are many promising new products coming out in the third quarter, including the heavyweight fifth-generation Apple iPad and the PC brand. The powerful new generation of Android 10.1â€ tablet is expected to increase its shipment volume to 49.6 million units in the third quarter under the stimulation of increasing specifications and attractive prices. The quarter growth challenge will be 21%. For the full year of 2013, flat panel shipments were estimated at 196.5 million units, including 153.2 million branded flats and 43.3 million white flats.